Despite the Delta surge, the charity circuit still draws celebrities, socialites and philanthropists. 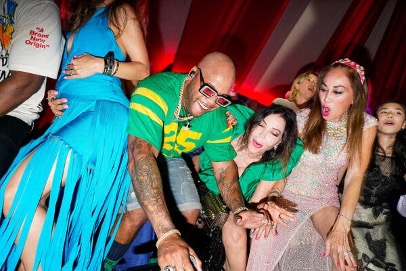 It was Friday night and Ms. Jones, who came prepared with a plastic face shield, was at the Angel Ball, a music-themed gala that usually takes place in Manhattan during the fall, but moved to Southhampton this summer because of the pandemic.

The event benefits Gabrielle’s Angel Foundation for Cancer Research, a charity started in 1996 by Denise Rich, the singer-songwriter and philanthropist, after her daughter Gabrielle died from acute myelogenous leukemia.

Ms. Jones was not alone in feeling concerned about being out on the party circuit while the Delta variant surges. The jeweler Lorraine Schwartz said she came only because Ms. Rich is a close friend and the charity donates 92 cents of every dollar raised to cancer research. One guest wore the top half of a hazmat suit. 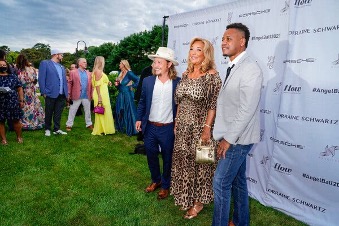 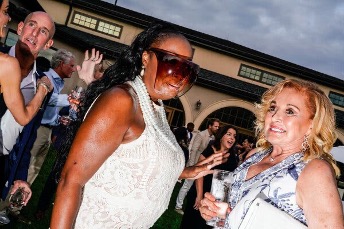 Ms. Rich, who was in a leopard print Dolce & Gabbana dress and earrings by Ms. Schwartz, tried to address the Covid concerns by requiring proof of vaccination. Indeed the guests, which included Maye Musk, LL Cool J and Jonathan Tisch, had to show their vaccination cards as they drove up to the front gate.

“Really, only Denise could pull off an event in the middle of a pandemic and have a wait list a mile long,” said Dr. Stephen Nimer, a noted blood cancer expert, in a short speech before dinner.

Also: it was a little strange to see in attendance Cuba Gooding Jr. (who recently pleaded not guilty to sexually assaulting three women at New York City nightclubs) and Russell Simmons (who was accused of rape by three women in a 2017 article in The New York Times; he has not been charged with a crime). 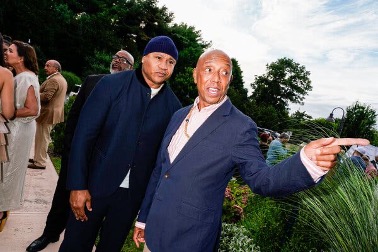 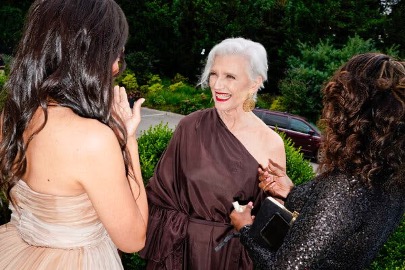 As waiters served roast chicken, the crypto billionaire Brock Pierce, who donated $100,000 in bitcoin to the foundation, went for a break on the lawn. There, he was buttonholed by people wanting to talk about their portfolios and the soaring NFT market.

His wife, Crystal Brock Pierce, discussed plans to open an NFT gallery in Puerto Rico, where they live. The first exhibit would be “a very famous digital artist second only to Beeple,” she said, referring to the artist whose digital artwork, “The First 5,000 Days,” sold for $69 million at Christie’s last March.

The gala took place under a large tent in Southampton, N.Y. Credit Rebecca Smeyne for The New York Times

Shortly after, an auction was held. Guests bid upward of $30,000 for a vacation in the Bahamas, an NFT by Marcel Van Luit and Cutting Edge Apollo, and a pair of 16.5-carat rose gold diamond mesh earrings donated by Ms. Schwartz.

The mood was so ebullient, the auctioneer Melyora de Koning had to keep telling people to settle down and stop talking.

But no such directions came from Flo Rida, who took over the stage after the auction. Over a hip-hop beat, he told the crowd: “When I say Flo, you say Rida.”

Some were packed together near the stage. Others, including Mr. Pierce, climbed onto the stage and danced with Flo Rida.

The refrain of the track being played kicked in: “It’s going down for real.” 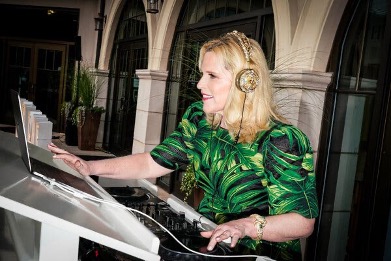 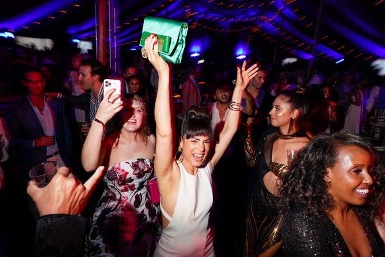